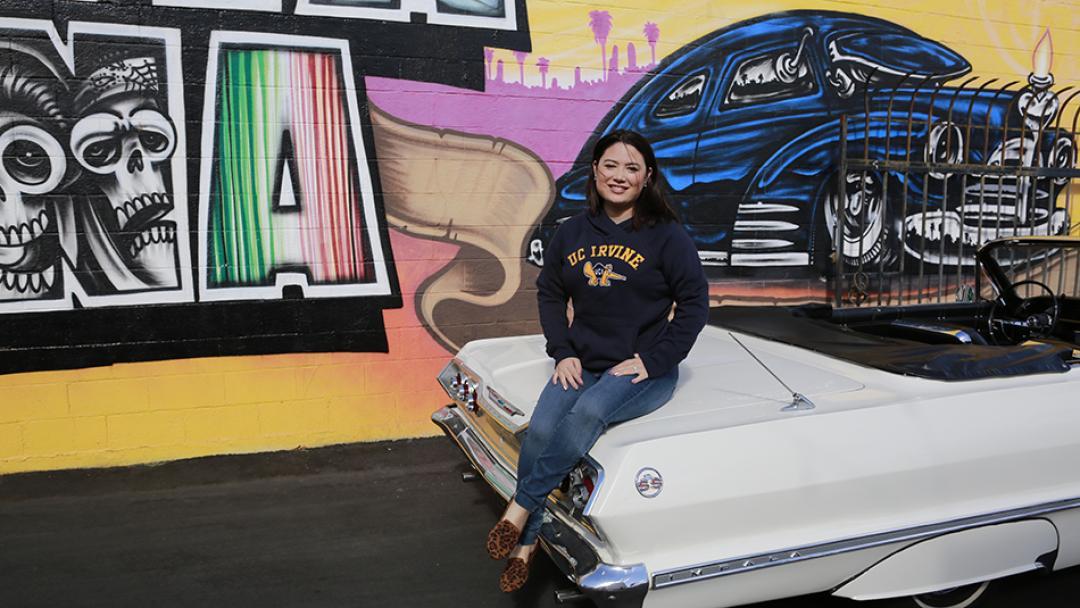 A School of Social Ecology Student Spotlight video begins with Ginny Oshiro opening the Zapateria Aranda shop in Santa Ana. She flips on the lights, grabs a box of shoes from the back room and admires the craftmanship of handmade bags hanging in the Main Street store owned by her in-laws, Antonia and Pedro Aranda.

Don Aranda is the namesake of a second Santa Ana shop, Pete’s Upholstery, which is owned by Oshiro’s partner, Eddie Aranda, she explained in an interview after the video she had not yet seen was shot.

“His dad started it in 1976,” Oshiro says of the business on Dyer Road. “His dad’s name is Pedro, but they told him Pedro’s Upholstery sounded too Mexican, so make it an American name. Eddie’s been running the business now for almost 20 years.”

She beams about the family she married into.

“They’re clearly entrepreneurs,” Oshiro says. “My in-laws are really lovely, and I can help them with a lot of stuff but they’re like, ‘Please, take a Spanish class.’ I frustrate customers, and I frustrate them because I put things in the wrong place due to the signs being in Spanish.”

She may come off as just another student, working her way through the doctoral program in criminology, law and society. But Oshiro’s study focus, corrections, specifically the programs that help the incarcerated reenter society, is as close to her heart as her family. That’s because she spent time behind bars in juvenile facilities and adult jails as an adolescent — and despite having been a good student before her troubles with the law, she credits reentry programs with having helped her obtain an undergraduate degree at Cal State Fullerton and continue her graduate studies at UCI.

The late Professor John Irwin, who taught sociology and criminology at San Francisco State University for 27 years, created Project Rebound in 1967 as a way to matriculate people into SFSU directly from the criminal justice system. Since the program’s inception, Project Rebound has spread to 13 other Cal State campuses and hundreds of formerly incarcerated folks have obtained four–year degrees and beyond.

“They really took a more holistic look at my academic track record, which a traditional university program is not set up to do,” Oshiro says of Project Rebound. “Because there was a program for students like me, they were able to advocate for me to be let into Cal State Fullerton.”

Continuing on to grad school was not even a thought at the time because “as far as I was concerned, I wasn’t even supposed to be at Cal State Fullerton,” Oshiro says. “I felt like that was the bonus round. I just did not think that I would apply to grad school because a bachelor’s degree seemed so out of reach for me.”

It actually remained out of reach for 13 years—the time it took her to complete her undergraduate studies. Oshiro says she encountered “barriers” on the way to graduation. Some were societal, such as having to check in with probation officers or having to determine whether someone with a record could attend out-of-state educational conferences. Other barriers were internal . . . and they linger.

“There’s still stereotypes and stigma,” Oshiro says. “The internal messaging that I got for so long was the barrier. For me, all the messages I’ve received throughout my life have told me that I don’t deserve to be in this institution of higher education, and I most certainly don’t belong in a Ph.D. program. How dare I study the criminal legal system?”

That’s why she is grateful for a network of advocates.

“Other scholars who are formerly incarcerated and are in this space always share their experiences with me, really empower me,” Oshiro says. “They’ve carved out a space for themselves, which makes room for me, essentially. And then they encouraged me to push that boundary even farther, to carve out more space for the person that comes behind you.”

Two scholars in her corner were Brady Heiner, founder and executive director, and Romarilyn Ralston, program director, of Cal State Fullerton’s Project Rebound. Recognizing that Oshiro had deeper questions about corrections than could be explored as an undergraduate, Heiner and Ralston encouraged her to apply to grad schools.

“It was so hard for me to surrender and just believe in other people, because they believed in me,” Oshiro concedes. “I told them I don’t even know how to apply, but they helped me to start looking around at programs.”

Her first choice was UCI, and not because of its proximity to home.

“I was trying to look at it pretty holistically,” Oshiro says. “What is the environment like? How is the culture and climate of the university? And I learned that by talking to grad students, looking at who is who in the department and seeing what they were studying, that UCI really stood out to me.

However, Heiner convinced Oshiro to apply to “a minimum” of 10 schools.

“So, I did, and I went on nine visits,” she recalls. “All of them were on the East Coast, like City University of New York, State University of New York in Albany, Northeastern. I was really fortunate to be accepted into all of them. I think Rutgers would have been a really great choice in a lot of ways. I was really excited about having so many other options and opportunities. But, of course, I was just waiting on UCI because when I sat down and looked at what I wanted to do, who I am as a person and how I would be supported, that was still my top choice.”

She received the acceptance letter she was waiting for — and has never regretted her choice.

“Everything about the university from beginning to end was great; even before I applied to UCI, I had an appointment with Dave Halgren,” the school's Ph.D. graduate coordinator, Oshiro says. “People were giving of their time and support and resources. Before I was even a UCI student, the students were willing to meet with me. The experience for me was this is a place where I will be supported, feel wanted and feel a part of. I wasn’t really necessarily getting that feeling from the other institutions.”

Not that her experience since has been perfect.

“I will admit, it’s been hard because when I was meeting with people, it was before COVID,” she explains. “I was so excited to be on campus and be part of the university because in my undergraduate program, I embedded myself in the campus and campus life. Being with other students was such a big part of my day-to-day life. And I really wanted that at UCI, especially because I think this is the hardest thing I’ve ever done in my life. So, in that way, it’s very isolating, and my head will start talking to me like, ‘You don’t belong here.’ The community aspect reminds me that I belong, and that I like having people to talk to. And so, when I started in the middle of a pandemic, all of my required coursework was essentially remote.”

She is quick to add that, even when studying remotely, she “still felt really supported. My professors made themselves available to me, and I developed and maintain close relationships with people in my cohort. I was given a mentor from another cohort. Even people who weren’t my mentors, but were from cohorts before me, reached out to me. A big part of it for me is having a supportive advisor who has been more than just an advisor, but a true mentor.”

That advisor is Val Jenness, Distinguished Professor of criminology, law and society.

“I don't know how she does it,” Oshiro says of Jenness. “I think she really, truly loves teaching. And she loves building up this next generation of scholars. I know how much she has on her plate, and even when she was on sabbatical, she was available to me. Spending so much time with me shows she is really invested in my success and development as a scholar.

“I had thought that maybe an advisor was like a formality. But you know, in this instance, I have someone who’s really invested in my development to the point where she will sit down with me, explain a concept and walk me through it. I leave that conversation having learned a valuable and practical tool. She has exceeded my expectations.”

Jenness is equally impressed by her mentee.

“Ginny is a pleasure to work with for so many reasons,” Jenness says. “She’s bright, creative, open-minded and willing to learn. She comes with an impressive work ethic and an abundance of experience, curiosity, and commitment. Her work is both imaginative and rigorous, while inviting us to think more deeply about the relationship between policy and practice as it relates to the promise of rehabilitation in California prisons and beyond.”

As Oshiro continues studying the efficacy of reentry programs for currently and formerly incarcerated people, she is confident the experience will set her up for whatever lies ahead.

“The great thing about UCI is it’s going to prepare me for whatever I choose to do,” she says. “I can go anywhere after this. Because I have a supportive advisor, I know I can go into another R1 research program, I can go into a teaching institution, I can go into policy, I can go into applied research. It’s really hard for me to say where I’m going to end up, but my heart is in research.” 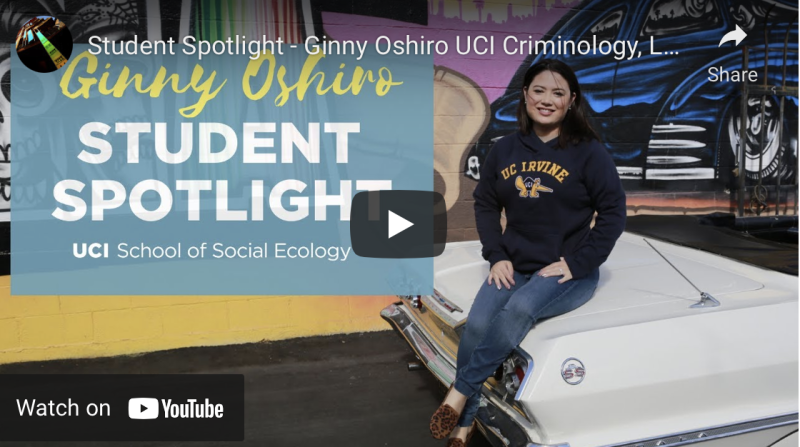