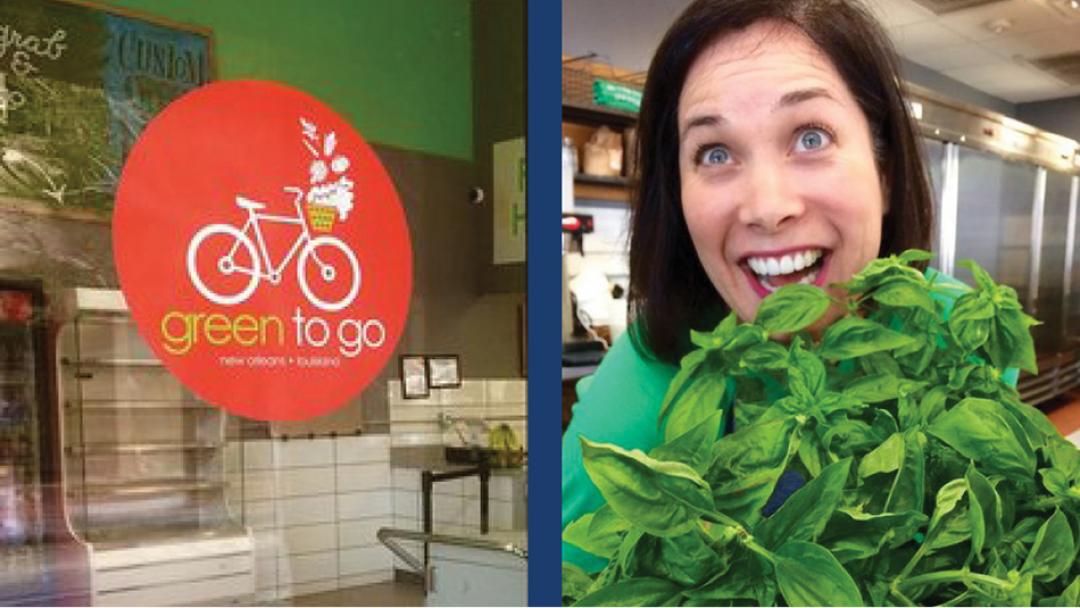 While busy caring for her newborn and a 2-year-old toddler in New Orleans one day at the end of 2011, Gia DiLeo craved a quick salad for lunch.

“I thought I’d really like something healthy to eat, but with two babies, I couldn’t sit around in a restaurant waiting for an hour,” she recalls.

That’s when the former trial attorney dreamed up a business for people searching for fast healthy food.

“So, I ordered a custom-made bicycle and went down to City Hall, and I said, ‘I want to make salads out of my home as a caterer and sell them from my bicycle around town,’ ” said DiLeo, who graduated from the University of California, Irvine with a bachelor’s degree in criminology, law and society in 1995. With support from her husband, Noah Emerson, and sister, Stephanie DiLeo, both physicians as well as UC Irvine alumni, Gia DiLeo’s Green To Go business was born.

With an initial investment of $10,000, she took to the streets of Downtown New Orleans on Jan. 6, 2012. DiLeo pedaled the rainbow – $8.75 salads featuring fruits and vegetables in all the colors that make up a rainbow such as beets, spinach, kale, beans, corn and oranges.

Within her first hour, she gained 50 followers on social media, and teachers at her sons’ child care center were her first customers. Within months, she bought a second bike, hired employees and opened shop in a local community center. Today, she has two restaurants and while she no longer delivers salads on her bike, customers use Uber Eats to order her meals Monday through Friday.

As a socially conscious and environmentally friendly business, DiLeo primarily uses locally-grown organic produce and compostable packaging. “I want to be as green as possible,” she said. “You want to feel good once you’ve eaten something but you also want to feel good about eating it.”

Having been raised in California, DiLeo said she learned about the importance of recycling and healthy eating in elementary school. So, after she opened her business and discovered that Louisiana had few recycling programs and fluctuated from being the state with the highest or close to the highest obesity rates in the nation, she started sharing her knowledge of healthy eating and recycling at local primary schools.

“I bring lots of fruits and vegetables with me and I let the kids touch and taste them,” DiLeo said. “We talk about eating locally-grown produce, food safety, healthy nutrition and recycling. With obesity rates as high as they are, it’s critical to start talking about healthy eating as early as possible.”

As for food waste, DiLeo said that whenever her restaurants have excess food, it is donated to homeless shelters.

She said she envisions her company evolving into a healthy meal service for families, much like Blue Apron or Hello Fresh.

“I see the company changing platforms a little in that direction, providing whole meals for families,” DiLeo said. “As a mom, I can tell you that it is so difficult after working all day long to come home and make a healthy meal and to be creative and thoughtful about it. I’m not the only parent who feels that way so if I can make that easier and affordable in a socially conscious way, I think families would benefit.”

On her UCI field study: “I did an internship at the Newport Art Museum. I was the assistant director for the ‘Anne Frank in the World’ exhibit. It was one of the most powerful experiences of my life. The job was administrative but the benefit was the personal component. Most afternoons we had a Holocaust survivor speak and every chance I could, I would listen to their discussions. It was humbling, heart breaking and tremendously rewarding work. It enriched my life and had a deep emotional impact on me.”

On UCI: “The education I got was incredible and well-rounded. It was also a tremendous bargain and I consider myself incredibly lucky. If I could do it over again, I wouldn’t have graduated in three years. I would have slowed down and taken more classes inside and outside my major.”

Quote: “To me, cooking is a physical manifestation of love.”

Advice to college students: “Education is absolutely important, but so is life experience, whether that means taking a gap year, joining the Peace Corps or going to graduate school. And, as an employer, I can say that it’s important to distinguish yourself by working hard. To be an entrepreneur, you need to put in a tremendous amount of hard work.”